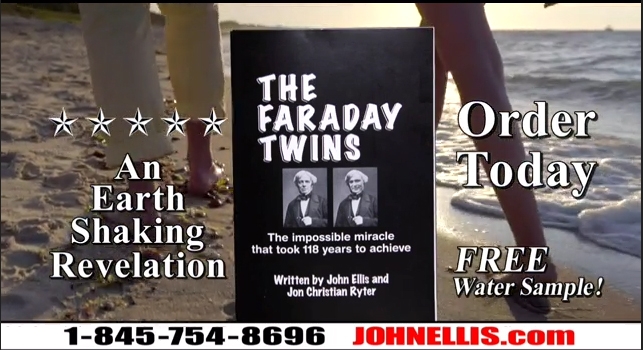 New Book- The Faraday Twins
The ingenuity of Electrical Engineer and Steam Plant design engineer, combined with the genius of self-taught Michael Faraday, the British Scientist whose discoveries in the early 18th Century included electromagnetism and electromagnetic induction for which John Ellis’ experiments 118 years later contained the lynchpin that held the secret to permanently change the bond angle of water and, perhaps, answer a question as old as the Bible.

As you read this book you will discover that Michael Faraday and John Ellis, intellectually, were identical twins. This is why the book was entitled “The Faraday Twins” although 138 years separated their births- and another 40 or more years, their successes. Every 19th-century scientists from Humphrey Davy, Thomas Brand (the 20th Baron of Dacre), William Hazelton Pepys and several members from England’s Royal Institute of Science who would ultimately use Faraday’s writings as a road map- particularly after physicist James Clark Maxwell read Faraday’s somewhat primitive writings (scientists use trigonometry to prove their theories, and self-taught Faraday had little comprehension of math), so Maxwell republished Faraday’s writings adding the mathematical formulas which proved Faraday’s theories.