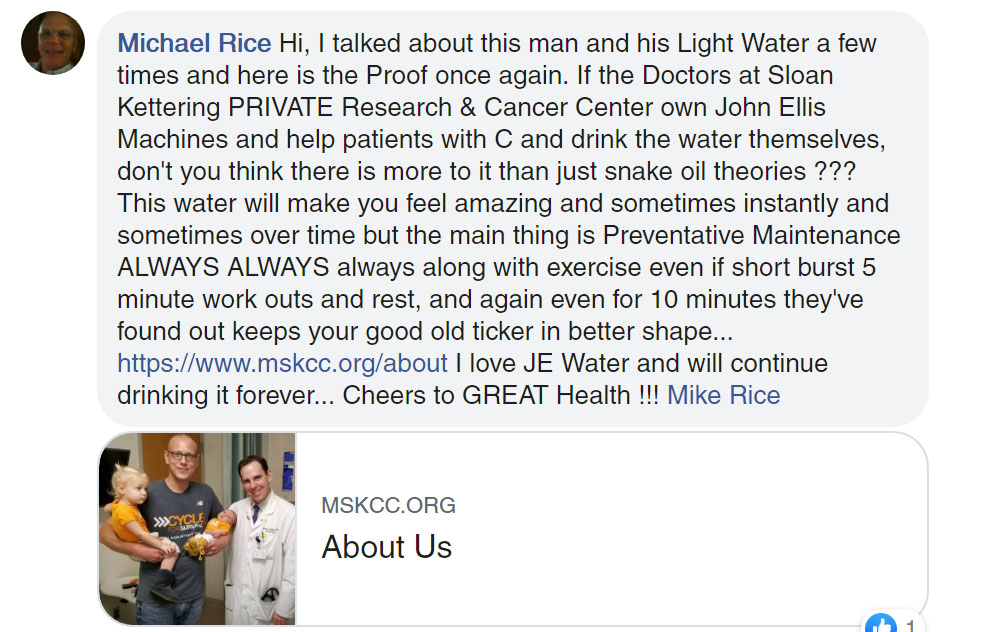 One afternoon, about ten years ago, a man called John Ellis, shocking him when he said: “Your machines cure cancer!” When Ellis asked him how he knew that, the caller said: “I’ve been an oncologist for 30 years. I just retired from Sloan Kettering and I don’t have access to your machines anymore!” He identified himself as Dalton Kinsella M.D. Although Crystal Clear has had countless conversations with the doctors at Sloan Kettering and other cancer centers, John was not aware that Sloan Kettering had his distiller for some time because the FDA has never approved anyone’s oxygen distiller as a medical device. (If you look at the Ammeter Energy Demonstration Video on the John Ellis website, you will see how easy it is for his machine to alter the bond angle of water from 104° to 108° and split bonded hydrogen/oxygen molecule in two molecules, and our body temperature burns up the hydrogen, leaving the oxygen. Since our blood is 94% water, the hydrogen molecule burns off the markers for anything you can name in your blood stream. Sloan Kettering oncologists told him that after two or three days the urine starts to smell (light brown and light green!).

Dr. Guy Abraham M.D. mentioned Ellis’ 114° hydrogen bond angle years ago when he independently tested John Ellis’s water while he taught at UCLA: “No other water is even close!

You can’t argue with something you can measure!! ”When the steam plant design engineer invented his distiller and water purifier about 50 years ago the FDA would not approve it for treating cancer because, many believe, the cancer industry is the most profitable medical specialty because it’s one of the few areas of medicine that, when you get a cancer patient, you have him or her for life since there’s no cure. Which is why the cancer industry has pressured the FDA not to sanction either the John Ellis distillation system or the European cancer treatment—oxygen— which has been legal in Europe for decades.