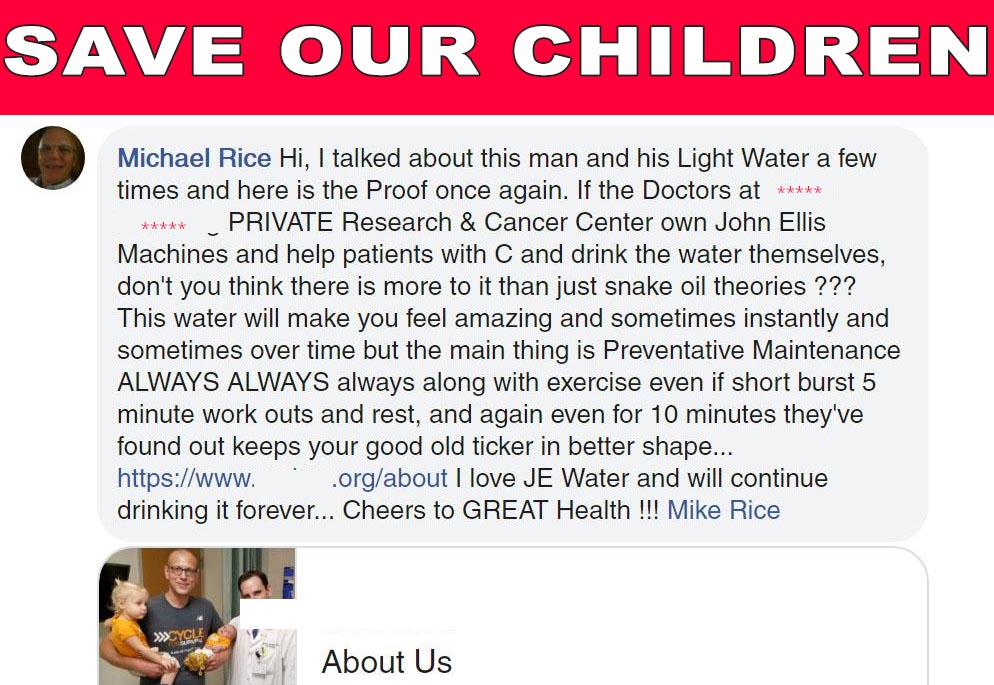 With an Engineering background and with Degrees that include Steam Plant Design, all I did was produce the results they were looking for as noted by a typical phone call after my discovery, patented in 13 countries: “Your water machines cure cancer!” He said he had been an Oncologist for 30 years and since he retired from S******  ******, he didn’t have access to our machines anymore (below)! Since this was previously unknown to modern science (it can’t hurt you because it’s ONLY water!), call Jon Spokes with his wife’s cancer success story, at THE WASHINGTON TIMES that has fielded 100’s of phone calls (we advertised every week for 14 years) and THE WASHINGTON POST ARTICLE: “10,000 people/day” that describes my patents. (Click on the sidebar). Also, click “About The Inventor” (on the sidebar) for a story out of WW 2 with horrifics that will SHOCK YOU! Gilbert C. de Daunant (below) risked his life saving these people and his brother was jailed for insulting a German officer! ORDER A MACHINE (above) and receive a FREE stainless steel coffee maker, water dispenser with sight glass (while they last)!

CANCER: IF YOU READ THE WASHINGTON POST ARTICLE (“10,000 people/day” on the sidebar), THE COMMENTS TO THE WASHINGTON TIMES and THE RYTER REPORT (click below), YOU WILL UNDERSTAND WHY ABOUT 1/3 OF OUR CUSTOMERS ARE CANCER PATIENTS (Regulators let us quote from any credible news source) and why a man said in a typical phone call: “Your machines cure cancer!” When I asked him how he knew that he said: “I have been an Oncologist for 30 years and I just retired from S**** *****g and I don’t have access to your machines anymore!” His name is Dalton Kinsella M.D. Although we have heard from these people for years, that’s how we found out they have our machines because it’s not approved as a medical device. If you look at the AMMETER ENERGY DEMONSTRATION V IDEO (below) you will see how easy it is for the body to also split our water into hydrogen and oxygen. Since your blood is 94% water, THE HYDROGEN BURNS UP THE IMPURITIES (and markers for anything you can name) in your blood stream and *****    *****g Oncologists tell us after 2-3 days the urine starts to smell (light brown and light green!)! Dr Guy Abraham M.D. mentioned our 114 hydrogen bond angle years ago when he independently tested our water when he taught at UCLA: “No other water is even close! You can’t argue with something you can measure!!” Regulators let us use this because it’s non-invasive but the water industry and their thousands of Dealers and shills have stonewalled this discovery for obvious reasons to the detriment of their fellow Americans! Typical letter just received: “My daughter in-law doesn’t need an operation for throat cancer!” (hydrogen burned up the CA125 marker?) 60 years ago when I was in Engineering School, I didn’t know anybody with cancer, MS, fibromyalgia or diabetes. Now, they are all epidemics!

AN 83 YEAR OLD TELLS YOU HOW TO AVOID A HEART ATTACK (below)!! ONLY 20 DROPS of our FREE ENERGIZED WATER reveals the amazing HEALING POWER OF WATER confirming S***     *****g Oncologists reports (below) with a 114 degree Hydrogen Bond Angle change (instead of 104 degrees) which is also your KEY to virtually FREE ENERGY! (click Ryter Report). The AMMETER VIDEO (below) PROVES it’s the ONLY “ENERGIZED WATER”!! ANY OTHER WATER may cause CANCER because it has NO MEASURABLE ENERGY! Use an Ammeter!! (“CURING ANYTHING: with over 200,000 testimonials!! The Washington Post 10,000 people per day”: sidebar The Washington Times) Today’s filters, distillers and ph ionizers are the CAUSE of HORRIFIC DISEASES because of LOW ENERGY (Video Proof!) They don’t allow ENOUGH Virus and Bacteria Destruction Time (click the Scientific Data on the sidebar) to destroy the CANCER VIRUSES, MS etc. If you change the HYDROGEN BOND ANGLE in any ordinary drinking water from a SLUGGISH 104 degrees to 114 degrees it clears arteries by increasing measurable blood flow! The only COUNTERTOP MACHINE that “cures” with the ENERGY FROM WATER! In 1988 our YORK LABORATORY MACHINE tests (on the sidebar) resulted in FTC ORDER C-3220 because of all of the other ordinary “water purifiers”, filters, distillers and “PH” ionizers: NONE can meet the Laboratory Standards for Pure Water!! AP 2/10/08: 57 drugs flushed into the groundwater are now in municipal tap water (below)! *WATCH THE VIDEO! The power DROPS from 30 amps to virtually ZERO by adding ONLY 20 DROPS of HIGH ENERGY water to ordinary LOW ENERGY tap, filtered, distilled or ionized water! Also, at 114 degrees, users look years younger with more energy because the “Body Electric” *REQUIRES LESS ENERGY to split water into hydrogen and oxygen!! The ENERGY VIDEO EXPOSES all the water scams and the “scientific” debunkers that made fools of themselves saying: “You can’t change the hydrogen bond angle in water” (when it’s MEASURABLE)! Our energized water machines produce “light” tap and “light” distilled water because ordinary distilled water (you wouldn’t drink) goes through these obsolete machines ONLY ONCE!! As a result, it has a hydrogen bond angle of ONLY 101 degrees while ours is 114 degrees for *PHENOMENAL results (Watch the AMMETER VIDEO): 85% of our bottled water customers re-order. Read what Elmer Bobst, The American Cancer Society founder had to say at my home (below) ORDER A MACHINE (above) Call 845 754-8696! With military contracts in the 1960’s, John Ellis predicted the Scorpion and Thresher submarine disasters (the worst in naval history) to his in-house military inspectors! Before you meet a similar fate because today’s water “filters” were designed for the 20th century NOT our 21st century water that requires 100’s of cycles of purification because of the constant threat of cancer and other horrible diseases from your drinking water that is DEVOID of energy (Video proof below), call us about a third party book that will shock you with details about the “self styled experts” that have become infamous because they are also putting greed before the lives of millions of Americans! Inspite of our patents in 13 countries, even lying Russian scientists say they are “curing cancer and other diseases” that they now call “their” miracle discovery!! They all spin a different story and name for the water but this simple Video (even using just two wires as the anode and cathode) proves who is telling the truth and that includes people with NO DEGREES IN THIS FIELD that have caused their own untimely demise. Again, add ONLY 20 DROPS of my “Energized Water” to ordinary water (Video below) and see how much more Hydrogen and Oxygen your body produces using VIRTUALLY NO ENERGY!! Look younger, live longer because the “Body Electric” requires LESS ENERGY to split water into Hydrogen and Oxygen by electrolysis like the Video (below)!! Since it’s non-invasive, Regulators let us use the comments from S***   *****g Oncologists (below): Since your blood is 94% water, after 2-3 days they confirm that the urine smells to high heaven as readily available Hydrogen burns up the impurities in the blood that caused the problems in the first place!!

At 83 years of age, my cholesterol is 146, triglycerides 65, heart attack risk 1/2 that of normal. After a physical my M.D. said: “You get younger and everyone else gets older!” No special diet or exercise etc. Feel GREAT, have fun and live your life WITHOUT the things in water that we know about that can slowly kill you!! As a result, after 40 years in business, we can tell you that thousands of people that purchased ordinary water filters/distillers designed for the 20th century (NOT the 21st century), that don’t allow enough DESTRUCTION TIME, died of horrible diseases while the results with our machines (below) is now a matter of PUBLIC RECORD at the DEQ!! Typical letter: “ONLY 4 DAYS after receiving your machine, the cancer changed color and started to shrink!! Your machine does everything they say it does!” Our sales started to boom in 1983 (Fly Ash from burning fossil fuels in the air causing viral infections! CDC.gov 10/14/83) Finally, THE WASHINGTON POST article (“10,000 people/day” sidebar). Now, you KNOW why (over 200,000 machines later and patents in 13 countries) this WORKS!! A letter received today: “In a town of only 3000 people, 300 have cancer from Fly Ash Viruses!” MORGELLONS DISEASE FIBERS from mold in plants and VEGETABLES: A world wide pandemic so terrifying, DOLE FOODS scientists tested our water for 9 months with a 7 page contract that we can send you with your machine because of MOLD on the banana plantations that causes the disease!!